I had a ‘eureka’ moment today, and appropriately enough it was in the bath!

Since moving to yet another new town, I have discovered the most amazing Charity Shop. I have scored some real bargains there, that have made me happy – a camel hair coat (a genuine one!), an almost knee length scottish hand-loomed cashmere cardigan, a cashmere jumper, some Boden jeans, a vintage dress-form and various other bits. This weekend I also struck gold.

There was a bin bag labelled ‘dog blankets’ going for £2.50. Now, My Boy is a real mucky pup, especially with the rain we’ve had lately which has turned the fields near me into mud baths and lakes, so I thought the dog blankets would be perfect to keep in the back of my car just-in-case.

When I got home, after a lovely walk by the canal with family (followed by the most incredible home-made cakes and a pot of tea) I investigated the ‘dog blankets’ only to discover that there were TWO Pure New Wool blankets in there, one of which was by Charles Early of Witney, Oxford. Early’s was started in the 17th Century and was considered to make the finest blankets in England. They were a very prosperous company, making blankets for the Royal Navy in the late 19th Century, but with the increasing popularity of the duvet cover (a Swedish invention, I believe?) they struggled to compete and eventually closed in 2002. There are still some companies that sell their blankets, which go for a small fortune. Anyway, the ‘dog blanket’ I got was in perfect condition and, as I have been after a wool blanket for some time now, there is no way that My Boy will get his mucky paws on it!

How did this lead me to a Eureka Moment, you might ask? I was pondering on the things I have been lucky enough to ‘rehome’, the things people donate – like my ‘new’ cashmere cardi, and then I recalled a hand-knit garment I ‘rescued’ several weeks ago. 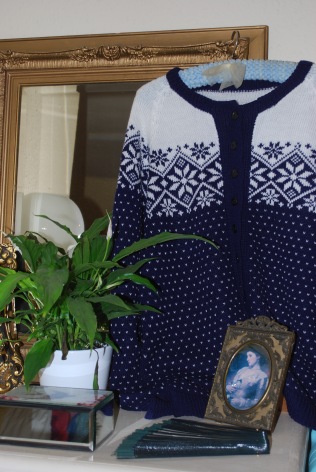 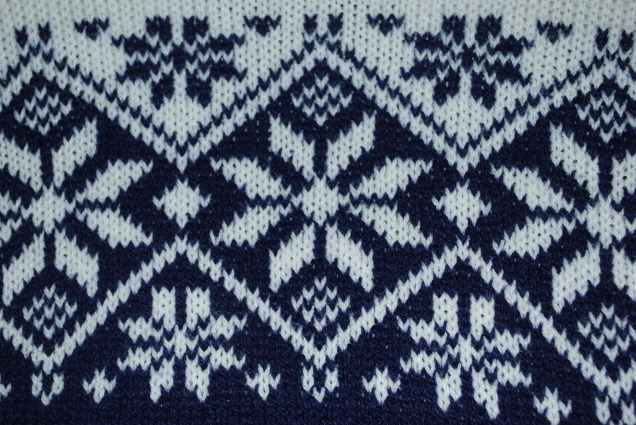 It’s not cashmere, it’s not soft and luxurious, but someone spent a long time making it, possibly for someone they loved very much, only for it to end up cast aside in a charity shop. Ok, so I might be being a little unfair – after all, I don’t know the reason why it ended up there – but such a small value was given to the work the knitter put into it (I paid just £3.99) that it made me a little sad.

So, my Eureka Moment? That I am proud to be a Selfish Knitter and to only knit for myself and those I know who love and appreciate my handmade gifts. Don’t get me wrong, I don’t make them to be applauded and showered with praise.

The Gift of Time

I make them because I love the recipient enough to give them the Gift of Time and Thought. I haven’t simply gone to a shop and purchased something that has been ready-boxed and prettified, or the latest ‘must-have’ that will be obsolete shortly. I don’t make them as a ‘cheap’ alternative. True, the yarn cost money (lots, sometimes!) but I am really giving time. I am giving the 30 hours it took me to knit the shawl (and to hook on every.single.bead); the 15 hours it took me to knit the scarf; the 9 hours it took me to make the amigurumi toy; the 12 hours it took to crochet the hat, because the whole thing was Slip Stitch (can you believe that?) so it looked like it was knitted. I should just have KNIT the flaming thing! If I were to attach an hourly rate to the gifts, they would work out very expensive indeed. But I don’t make them because of that.

I make them because I love who I am creating for. I make them because I know they appreciate the thousands of hand movements that went into each item, because they know that the colour was picked (in some cases dyed) just for them, that the fibre was chosen specifically because it’s their favourite or I want to wrap them in something exquisite, and that I sometime design a one-off just for them that won’t be repeated, ever again. I know that they will cherish the gift, won’t think it’s ‘cheap’ because it’s hand-made, and will never, ever, let it be cast aside to be rescued by someone like me.

Or, at least I hope they won’t!